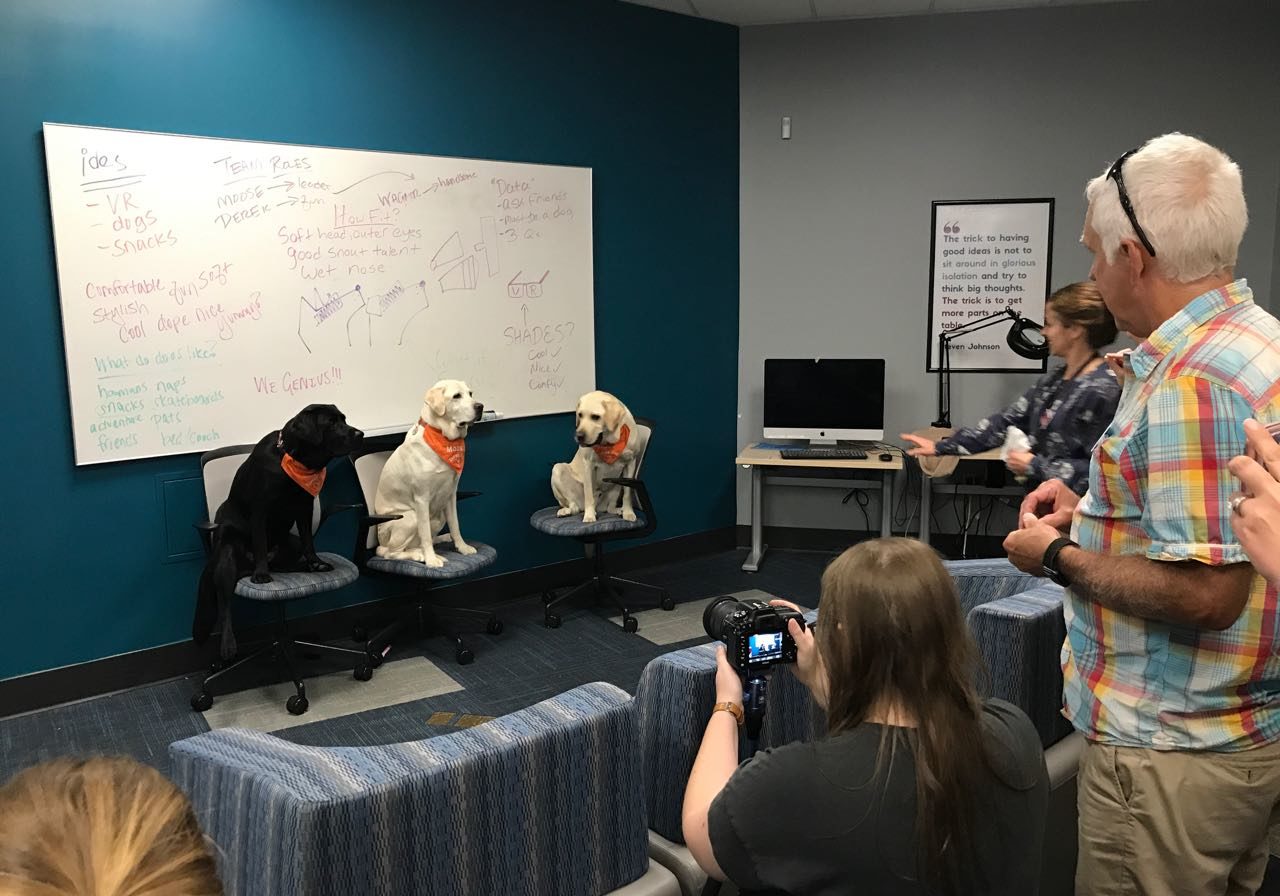 Since there’s a lot of unseen work behind even a short video, I wanted to take a chance here to tell the story behind one of my team’s newest learning objects, “Create and Collaborate at Newman Library,” which stars…therapy dogs.

I’ve been a huge fan of the work done by the counseling center’s therapy dogs (scroll down to the bottom of the page for their staff bios) and their human, Dr. Trent Davis, ever since I first met Moose and Trent at a first-year orientation fair a few years ago. The content production team’s current partnership with the therapy dogs began in summer 2018. I wanted to create a video about reading Library of Congress call numbers and checking out a book, but I needed some way to make the video interesting. When I first thought of including Moose the therapy dog (the only campus therapy dog at the time), it seemed like a partnership that would not only benefit us, but also help more people learn about Moose and the work that he does. Trent was excited to partner with us, and the result was “How to Find and Check Out a Book” (VT-specific) and “Using a Call Number to Find a Book” (non-VT-specific).

When I saw Trent, Moose, and Derek (newly added to the therapy dog team) at an exam event in the library in fall 2018, Trent said they’d love to do another video sometime. My mind instantly started running through the possibilities, and after talking with others in the library, we decided that a promotional video about our library studios would be nice to have.

The challenge with a video that, technically, you don’t have to make (no one from the studios had asked us to make a promotional video, though they were really excited that we were), is that it can be difficult to find the time to work on it. We tend to make more learning objects during the times when we aren’t as busy with instruction, typically the summer and the tail ends of the fall and spring semesters. This video sat on the back burner for a couple of months after we decided to make it, but in June, we were able to start working on it. The first step was scripting and storyboarding. My supervisor, Kayla, was managing one of the studios at the time, so she brought the idea to the other studio heads, and they brainstormed potential ideas that would allow the story to include each of the studios. The strongest idea that emerged was that Moose would be on a quest to experience virtual reality, but since he couldn’t wear a typical headset, he’d have to design his own. That quest would take him through each of the studios and could involve all of the therapy dogs (up to three at that point!).

With the idea in hand, I started working on the script, beginning by watching the previous Moose video and thinking about what made it appealing: a simple narrative, dogs doing human things, dogs doing dog things, goofy moments, bouncy music, and real information being conveyed. After I had a draft script, I sent it to the studio heads for feedback and edited it based on their suggestions. For each studio that the dogs visited, a pattern emerged: move the narrative forward, explain what students can do in the studio, and get the dogs to the next studio.

Once we had a script, it was time to storyboard. For that, I brought in my coworker Kelsey, who would be doing the actual filming. We used our standard storyboard format, which breaks down the script into pieces according to what we expect to see on the screen:

We also created several lists: things we needed for the filming that day, props we needed to procure, and a detailed shot list of the visuals we definitely wanted to capture. Once we’d confirmed a date and time with the dogs and their humans, we also created a detailed filming schedule by location. Since we were dealing with six locations and extras for each location, the scheduling portion was challenging. We were squeezing in filming the last week before classes started, which meant that many student workers would be there to be in the video, but it also meant that the library was a bit busier than it had been for most of the summer.