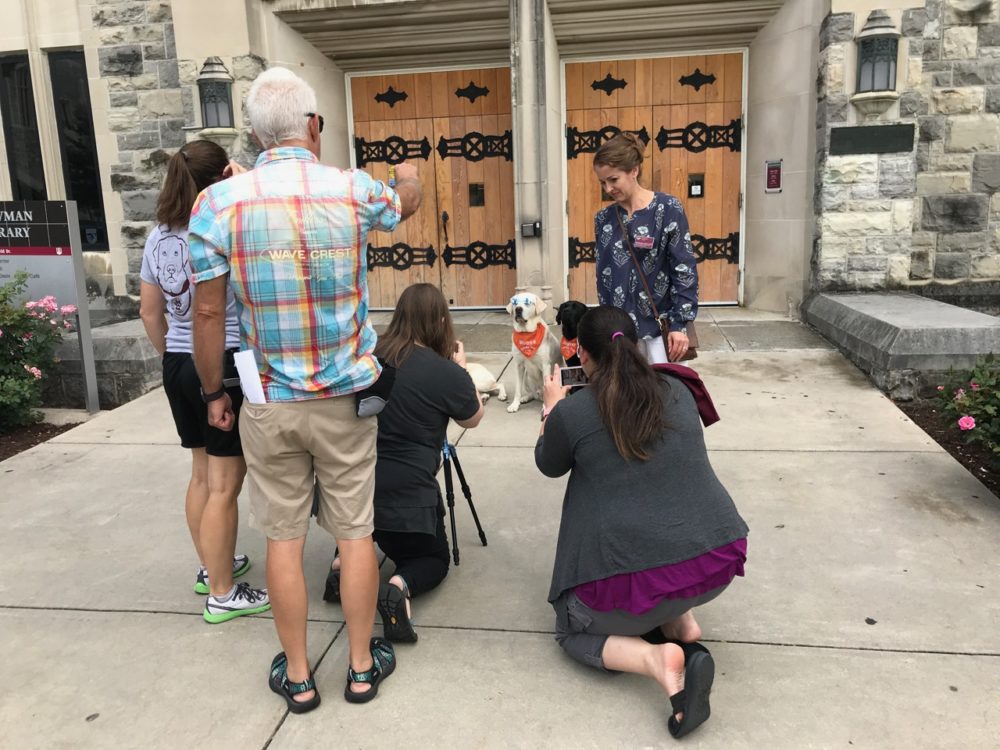 My excitement grew as the filming date approached. Having worked on the video with Moose the previous summer, I knew that filming would be both challenging and fun. The dogs are all incredibly well behaved, but they’re still dogs, after all. On a warm August day, all three dogs, along with three human handlers, arrived at the library to film. All of the dogs have been highly trained, either as a seeing eye dog (Moose and Derek, who were both released as seeing eye dogs due to minor medical problems) or as a PTSD support animal (Wagner), so they follow commands well and are very treat-motivated.

Many of the shots that we wanted to get were pretty basic: dogs sitting in chairs, dogs walking down a hallway, dogs “talking” with a studio employee. Cut together with voiceover and bright music, these simple shots add up to a fun video. Overall, getting all of these shots, in locations all across the library, took about 3 hours, with a break in the middle. The sight of three dogs in the library drew a lot of attention, so the dogs also got to hang out with patrons when we weren’t filming.

To film the content, we used library-owned equipment. Since the only sound on the video would be the music and narration, we didn’t have to worry about recording audio while filming, which made things a lot easier. We also set up a Go-Pro in each location while we were filming in order to capture any fun moments that might occur. The best one was when Kelsey used the Go-Pro to try to get a close-up of Moose getting a treat and he accidentally knocked the camera out of her hand – look for it as the final shot of the video.

Once filming was complete, I wasn’t able to do too much work with the video at first because the fall semester started the following week. One thing I did do was put together a quick thank-you video to share with everyone who had worked on it. With a few edits later, it eventually became the video’s trailer:

Before I could create the final video, I first had to look through all of the footage and identify the usable portions of each clip. Kelsey and I had decided in advance to err on the side of keeping the camera rolling as much as possible to make sure we captured the maximum amount of footage, whether or not it was what we were going for. My first step was to watch each clip, rename the file so that we’d know what it contained, and note the points in the video which had the content we needed. This portion ended up taking a lot longer than I’d anticipated, and it was complicated by the fact that I began to get eyestrain and motion sickness from watching HD video on my HD monitor for more than about 15-20 minutes at a time. I ended up switching one of my monitors to a much lower resolution and making the window in which I watched the videos quite small. This problem with motion sickness would end up being a challenge throughout the entire editing process.

This process of watching the clips and identifying the usable portions ended up taking over a month, as I worked on it in snatches of time throughout the day. When I was finished, I took the storyboard and filled in the file names of the clips.

Kelsey had gone to each location and shot B-roll of the studio interiors and exteriors, so I incorporated those into my planning as well. I’d had one of my colleagues record the narration, so once I was finished mapping the clips to the storyboard, I began assembling the video.

Coming soon – part 3, putting it all together.